Although most insect learning focuses on bees, Dr. Weiss and colleagues have noted that Lepidoptera are also capable learners, especially in terms of matching colors with a food reward. In this study, we asked whether Monarch butterflies (Danaus plexippus) could learn to associate a compound stimulus for a food reward. In this case, we examined two visual cues: color and shape. We found that color was a more salient cue than shape in terms of foraging. However, D. plexippus could learn floral shapes, independent of color. Therefore, our study suggests that Monarchs are capable of combining multiple floral cues in order to forage successfully.

In this study, we sought to determine whether or not Pieris rapae (Cabbage White) butterflies could distinguish between colors for a food reward. In conjunction with master’s student Lillian Power, we determined that P. rapae was indeed capable of learning to recognize colors for a food reward, but were not as proficient as D. plexippus used in a similar study. Our results suggest that learning within Lepidoptera may exist on a spectrum, as some species are better at learning colors (an extremely salient floral cue) than others.

Host Recognition in an Oribatid Mite

Mochloribatula texana is a species of oribatid mite that was until recently only documented in Texas. M. texana lives under two species of host lichen, Flavoparmelia caperata and Parmotrema eurysacum. Following the discovery of M. texana on the campus of Georgetown University, Michael Wytock and I extracted secondary metabolites of the lichens in an acetone rinse in order to determine the foraging cues used by the mites. M. texana preferred F. caperata over P. eurysacum. Additionally, we found that the mites preferred paper soaked in the secondary metabolites that originated from F. caperata, which suggests that M. texana seeks out its host lichen using chemical cues. Textures of the lichen did not appear to have an effect on the choices made by M. texana. We also found that M. texana is sensitive to light, meaning that the species will specifically seek out dark places. Therefore, we were able to determine that host recognition in M. texana is most likely driven by a combination of chemical cues and photoreception.

Epargyreus clarus (Silver-spotted Skipper) (Hesperiidae) is a native North American skipper that feeds on multiple species within the Fabaceae family. Normally, larvae will feed on a single host for most of their lives. Yet, in some cases, larvae are forced to switch hosts. If a larva is forced to switch, do they have preferences for certain hosts, and how will their choices subsequently affect their growth? E. clarus larvae do have preferences for certain hosts, and display both an innate preference for Robinia pseudoacacia, and showing induced preferences for the hosts that they were raised on. Interestingly, preferences for host plants also appear to be correlated to larval performance, as E. clarus larvae spend less time developing and weigh more as pupae when raised on R. pseudoacacia. Additionally, when larvae are forced to switch hosts late in larval life, their growth is subsequently affected. Individuals raised on a good quality host plant in the last instar were able to match growth rates of individuals raised on the same host for the entirety of their larval lifespan. However, individuals switched to a poor quality host plant at the last instar matched growth rates of individuals raised on the poor quality host for the entirety of their larval lifespan. The data suggest larval preferences can have important effects on individual growth, and can therefore influence community dynamics.

Dynamics of Endosymbiotic Infections in a Linyphiid Spider
Master’s Thesis 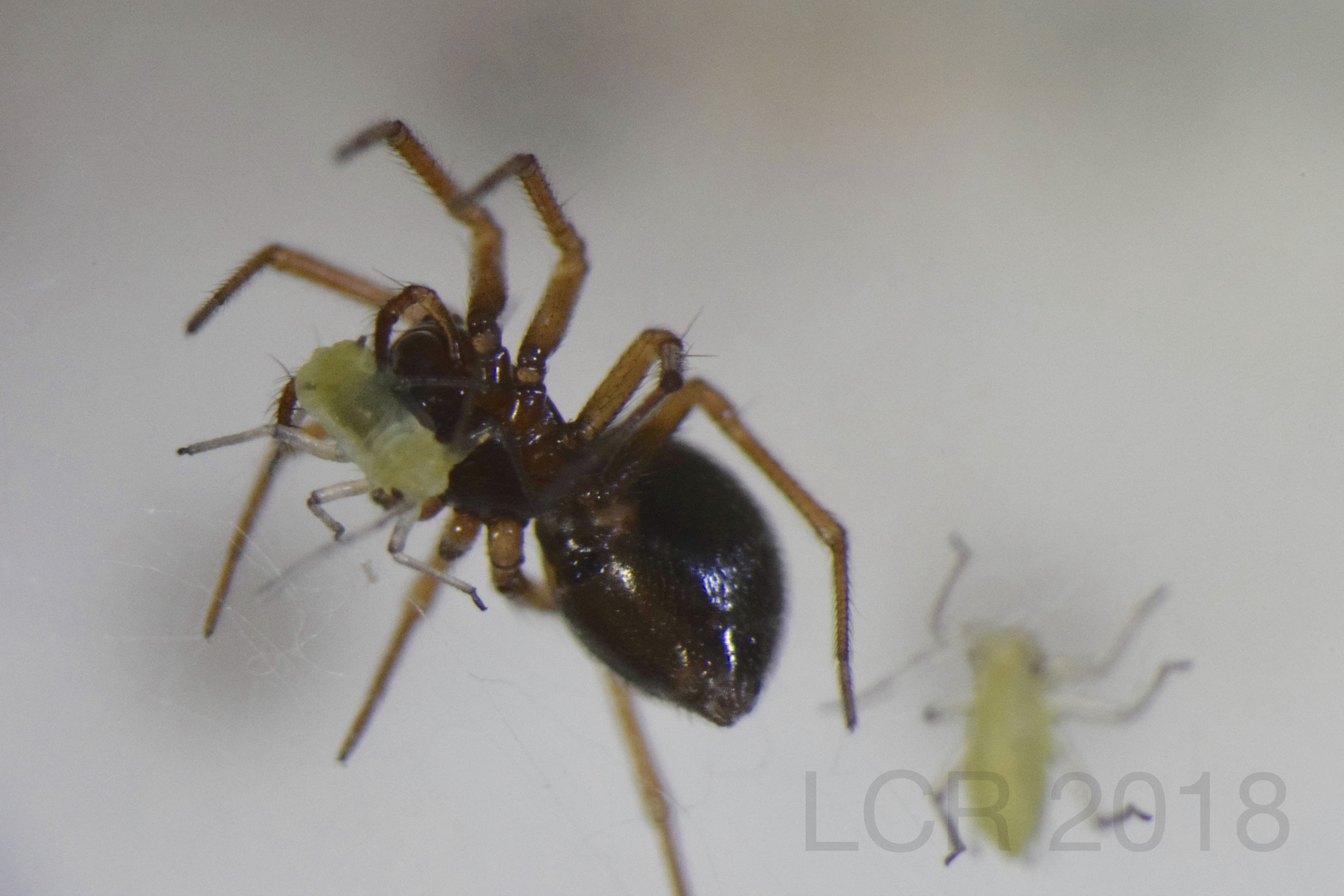 Maternally-inherited bacterial symbionts are capable of creating a wide array of reproductive manipulations within their hosts. Mermessus fradeorum, a native Linyphiid spider, often hosts multiple bacteria which can cause feminization of males as well as cytoplasmic incompatibility. Using 16S metagenomic sequencing, we determined that up to 5 different strains of bacteria could be responsible for reproductive manipulations witnessed in M. fradeorum. In particular, a strain of Rickettsiella appears to cause cytoplasmic incompatibility (a conditional sterility phenotype) in M. fradeorum, which has been not documented previously in arthropods.  Additionally, field surveys were completed in order to determine the extent and diversity of endosymbiotic infections in M. fradeorum of regional populations found in central Kentucky. For further details, please see my thesis.